Goosebumps...Still get my heart going

For the past month, I have been reading the Goosebumps book series by R.L. Stine. I have read and finished two books, Night of the Living Dummy and Stay out of the Basement. These are both books which as a child I was terrified to read. I remember my brother owning a selection of them and trying to read them and having to hide them under the pillow or just giving up before I had finished the first couple of chapters just due to the anxiety and fear they produced. My partner decided he wanted to buy a collection of them as he loved them as a child and was interested in re-reading them. I thought I am a grown up! I am 26 years old with my own house and a respectable job, I can read Goosebumps...I am starting to doubt myself again.

"It was a still night. No breeze. The curtains in front of the open bedroom window didn't flutter or move. Pale silver moonlight filtered in, creating long purple shadows that appeared to creep across the girls' bedroom.
Lindy had been sleeping fitfully, a light sleep filled with busy, colourful dreams. She was startled awake by a sound. A gentle thud.
'Huh?' She raised her head from the damp pillow and turned.
Someone was moving in the darkness.
The sounds she'd heard were footsteps.
'Hey!' she whispered, wide awake now. 'Who is it?'"

We originally bought the Goosebumps box set as we thought they would be interesting to relive our youth and to see if they were still as scary as we had originally thought. I did not know which book to start with so I was talking to my partner about them. He looked at the titles as he had previously read them and recommended starting with Night of the Living Dummy, fully aware that I did not like Slappy from the film. However, I have seen the film and enjoyed it and I thought if I can watch it then I can read it, surely. I also forgot how through imagination you can create a whole range of images and thoughts yourself based on a simple description.

I felt anxious throughout the book. That anxiety which appeared when I was a child reappeared. I was constantly on edge for the main characters for what would happen to them. I was so glad when I was able to stop reading it to go to bed. In fact, I am that much of a wuss I was unable to read Goosebumps in bed, at night, and had to replace the book with a Cosmo magazine.

The story is about twin sisters, Kris and Lindy who stumble across a ventriloquist doll in a skip. They decide to take him home, thinking he looks playful and smart. They do not realise they have brought Slappy into their lives. Slappy becomes Lindy's and Kris feels left out, enter Mr Wood. We soon realise the dummies are not what they appear and they do not have nice personalities. Their personalities come out through a range of different things and we find out what truly causes the night of the living dummy. Things happen during the night, noises, sounds, missing items. The dolls do not stay where they were placed, and they definitely do not like being placed in the dark wardrobe overnight. Will the dummies get their way or will the intuition and quick thinking of Lindy and Kris help or just keep on making matter worse? 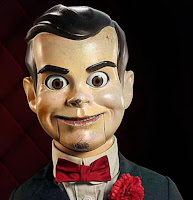 I thought the characters were well written and Stine had thought through specifically where he wanted his characters to go and what kind of people he wanted them to become. I believed Kris and Lindy and I felt for them, compared to other recent reads the characters have not spoken to me to feel for them. There was good detail throughout the book to work with my imagination to feel the emotions of Slappy and Mr Wood. I also felt strongly for the two girls when trying to show their parents what the dolls were really like and no one would believe them. I felt frustrated for them as I knew what was going on and their parents didn't. I never felt comfortable with either dummy, Slappy or Mr Wood. They both made me feel uncomfortable and tentative for the girls. I feel this is due to good writing and imagination from Stine. 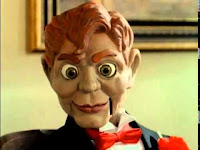 The story flowed well and there wasn't a time where I got bored or did not want to carry on reading. I felt Stine had thought the story through well and had created a number of different twists and turns which I did not see coming. I believe Stine does not have the ability to think about what is acceptable and not when writing Goosebumps as there were a number of times I did not think he would write the way he did. There is a selection of things both Slappy and Mr Wood do which I thought was a bit cheeky and rebellious, which I feel as an older child or adolescent I would have loved and that would have massively appealed to me. Through Stine, Slappy and Mr Wood were able to push boundaries and find out what Kris and Lindy were truly capable of.

I would definitely recommend reliving your youth and re-reading the Goosebumps books. This book was interesting, gripping and a thrill. I am glad I decided to read it now rather than as a child as I feel I would have had bad dreams for a long time and had a big trust issue with dolls. I am so glad I am not that afraid of Slappy anymore...much.

"Maybe I'll give Diane a call, Margaret thought. She reached for the phone, then realized she was hungry. Lunch first, she decided. Then Diane.
She brushed her dark hair quickly, shaking her head at the mirror over her dressing table, then hurried downstairs. To her surprise, her dad was in the kitchen. He was huddled over the sink, his back to her.
She started to call out to him but stopped. What was he doing? Curious, she pressed against the wall, gazing at him through the doorway to the kitchen.
Dr Brewer appeared to be eating something. With one hand, he was holding a bag on the counter beside the sink. As Margaret watched in surprise, he dipped his hand into the bag, pulled out a handful of something, and shoved it into his mouth." 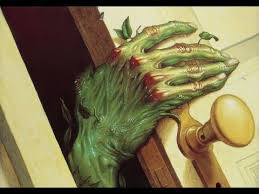 Having already read Night of the Living Dummy I was apprehensive as what to expect. The reason I chose Stay out of the Basement to read next was that this was the book which a taster chapter had been given in the previous book. I think I will continue to choose which Goosebumps book to read next based on this. If the book recommends the next read then this will be the next book. I was nervous about where the story would go. Thankfully I found this book a lot easier on my anxiety and fears. Perhaps I have less of a fear of plants than I do dummies.

I felt the book was as effective and creative as the first one. I thought Stine had worked well with the characters again and I particularly enjoyed how he changed Dr Brewer's personality as the book went on. Although clues were given throughout the story I was completely unaware as to how the book would end. Just like in Night of the Living Dummy, I did not know how the main characters were going to fix the situation they found themselves in. However, through twists, turns and great detail I was kept engaged and enjoyed the book throughout. 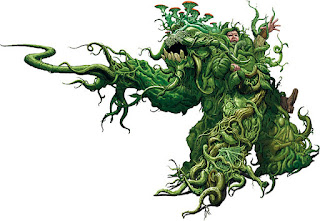 Margaret and Casey are shocked to find out their mum has to go out of town to look after her sister. This leaves them with their dad who has been acting very suspicious since losing his job as a scientist at the university. Their normally chatty, fun dad has turned into a recluse. He does not talk to anyone, he does not engage with his children anymore and Margaret and Casey have been given strict instructions to never go into the basement. Their dad has become very angry towards the children and he is acting very strange when they do see him. He refuses to remove his cap, he only eats on his own at night and he has been seen doing odd things during the night. Thankfully Margaret and Casey have each other to talk and discuss what they think is going on, although I did feel scared for both children as I did not know what their dad was capable of with everything he was going through.

I do massively feel there is an educational value to the Goosebumps books. I remember as a child myself them being very popular with a range of children of all different ages, and young children wanting to be old enough to start to read them. I am still finding this now. The school I work at notice their Goosebumps books disappear very quickly off the shelves in the library when the children see they are there. They are massively popular and the children thoroughly enjoy them. They discuss them and talk about what they think will happen next and which book they will move onto once they have finished their current read. I feel these books have and still are encouraging children to read and develop their love of books.

I would definitely recommend this book and would ask all children to read at least one Goosebumps book at some point, you will not regret it, although, like me, it may take you some time.

Rating: 7/10 - only giving his book less as I was not as scared compared to Night of the Living Dummy.
10-word-review: Everyone should read Goosebumps book, always will be a classic.

The next book which I will be reading is Apples by Richard Milward. I have owned this book for such a long time since being recommended it by two friends. The author is a friend of someone I know. I have really high hopes for this book as it is based on where I live so I feel I will be able to massively relate to it.

I will also be re-reading The Boy in the Striped Pyjamas by John Boyne. I will be reading this over the Easter holidays as this is the next book which my children will be studying at school. I have read it before and seen the film but it is just such a harrowing read I think it is so important the children know what happened and history does not repeat itself.