"Ginny:
He's getting there, it just might take him a bit of time - and you a bit of time too.
Harry smiles. She looks back at Albus. He does too.
You know, after I'd opened the Chamber of Secrets - after Voldemort had bewitched me with that terrible diary and I'd almost destroyed everything -


Harry:
I remember.
Ginny:
After I came out of hospital - everyone ignored me, shut me out - other than, that is, the boy who had everything - who came across the Gryffindor common room and challenged me to a game of Exploding Snap. People think they know all there is to know about you, but the best bits of you are - have always been - heroic in really quiet ways. My point is - after this is over, just remember if you could...that sometimes people - but particularly children - just want someone to play exploding snap with.
Harry:
You think that's what we're missing - Exploding Snap?
Ginny:
No. But the love I felt from you that day - I'm not sure Albus feels that.
Harry:
I'd do anything for him.
Ginny:
Harry, you'd do anything for anybody. You were pretty happy to sacrifice yourself for the world. He needs to feel specific love. It'll make him stronger, and you stronger too."

This has to be one of my favourite parts of the new playscript written. It shows the love, affection, and concern both Harry and Ginny have for each other. It is a clear representation of the feelings the two of them hold for one another all of these years later.

The new Harry Potter story is written 19 years after the end of the Deathly Hallows. Harry and Ginny are now married (sorry for spoiling if you didn't already know), as are Ron and Hermione (sorry again!). They all have children who now are starting to attend Hogwarts. James, the elder of the Potter sons, is annoying his younger brother, 11-year-old Albus Severus. This is where we start the beginning of the play.

From the very beginning of Albus' time at Hogwarts, he feels different. He feels like he does not have his father's love, his father's attention. That everything Albus does is wrong in the eyes of the great Harry Potter. Starting with the house Albus is placed into by the Sorting Hat (won't spoil that for you!). 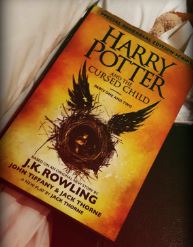 Albus makes an unusual friend in Scorpius Malfoy. No points for guessing who his father is! They become best friends and it is just what Albus needs, someone he can confide in, someone who will listen to him, someone who will keep him in check and stop him doing anything stupid. Only for so long.

Amos Diggory comes to visit Harry on a number of occasions to enquire about the rumoured time turners the Ministery allegedly possess. He wants to go back in time and save his son, Cedric, who tragically died at the hands of Voldemort in the Triwizard Tournament at the end of the Goblet of Fire. Harry is persistent that the Ministery do not own a time turner and this cannot be done. Albus overhears this conversation and decides to take it upon himself, and Scorpius, to abscond from the Hogwarts Express and go and pay Mr. Diggory a visit. This leads to a whole range of jumping through time, changing history, avoiding being caught and trying to make themselves known as their own individual person and not the children of the famous Harry Potter and the former Death Eater Draco Malfoy.

There is a vicious rumour spreading about Scorpius' lineage and who his father really is. Draco is desperate to have this story squashed once and for all. There is a very kind, or so she seems, niece of Amos Diggory who is very enthusiastic to help the two young boys in returning to the night Harry first meets Voldemort. Delphi Diggory is the cousin of Cedric and is too enthusiastic for my liking from the very beginning. There was something suspicious about her when she would not answer Scorpius' questions about her family.

There are a number of times throughout the play where I felt myself gasp and laugh and realise just how much I have missed the build up and wait for a new Harry Potter book. It only took me 2 days to read and I wish could read it all over again and it be for the first time. I really did enjoy it and I am sad to know that I will not be able to go and see the play for a long time. Money and distance permitting.

I grew up with Harry Potter. I did not read the first book until I was in Year 7 and then when the 5th book arrived I was in Year 9 and finished my time at secondary school with the final book. I have always said Prisoner of Azkaban was my favourite in the series, closely followed by the Order of the Pheonix. I am a massive Sirius fan, my mum not so much! This play does not let the story down. I thoroughly enjoyed it and I will just add it to the collection of books, posters, clothes, stationary etc. that I already have.

I did, however, find the story a little too futuristic for my liking. I am well aware that the book is set in 2020 so I can't be thinking things will be the same as they were in the original series. But, the original series had a very distinct old feel to it. Diagon Alley was always an eye opener as although they are wizards they still use old utensils and equipment I mean look at the hospital scenes after the Battle of Hogwarts! They are still using stretchers which nurses used during the war. It all just felt too modern for my liking. Yes I am 25, yes I am aware that makes me sound 95, but it's how I felt. However, it would not stop me from reading it again and again and again. The play is split into two parts so there are two different plays you can go and see I would absolutely say you have to go and see both. It just would not make sense without. You would be left on a cliffhanger if you only saw part one and you would have no clue what was going on if you only saw part two. A good way to make more money from the franchise.

I would like to ask one question! Where is Hagrid? The play revisits the first night Harry met Hagrid once the Dursley's had taken him to the island, but it does not tell you where he now is. The play talks about what happened to Petunia, what happened to Neville, what happened to Dudley but no mention of Hagrid. Hagrid was one of my favourite characters, he doesn't beat Sirius though. But there is absolutely no mention of him. How can one of the most beloved Harry Potter characters just not be mentioned? I think you slipped up there Ms. Rowling.

I would definitely recommend the play and I can only hope that I will get the chance to go and see it one day.

My next book to review will be Bridget Jones Diary by Helen FieldingGoodreads page will know. I will be posting again shortly about what I think of it.
. I am already 30+% through it as those who have followed my

I have today bought Shadows of the Workhouse by Jennifer Worth and Gulliver's Travels by Jonathan Swift. I haven't read either book before but I am going to add them to the list and eventually get round to reading them! 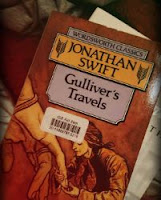 My local town is opening a Waterstones this weekend. It is the first book shop we have had in our town in over 15 years. It's not a very big town. I am really looking forward to it. I would have preferred an independent store, but I am so looking forward to it opening. Also, the library has just received a renovation and that will also be opening shortly. Great things are happening for book lovers. Thank you one again for reading my review. The new review I post will probably be once I am back at work. The school holidays are very nearly over! Thanks again, Steph xx
at 23:25