I Owe You One...Not the usual Sophie Kinsella that I love 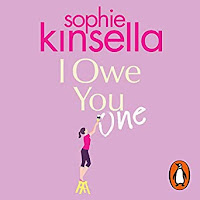 "I learnt that failure doesn't mean you are a failure; it just means you're a human being...But what can you do about mistakes except thinking, Won't do that again, and move forward?... The trouble with me is, I can't let things go."

“I stare down at my shoes, watching as a fine layer of ash settles on the worn leather. This is where the bed I shared with my sister, Prim, stood. Over there was the kitchen table. The bricks of the chimney, which collapsed in a charred heap, provide a point of reference for the rest of the house. How else could I orient myself in this sea of grey?”

"They spelled out the name under the photograph.
Adolf Hitler.
'He wants everybody to vote for him in the elections and then he's going to stop the Jews,' said Elsbeth. 'Do you think he's going to stop Rachel Lowenstein?'
'Nobody can stop Rachel Lowenstein,' said Anna. 'She's form captain. Perhaps he'll stop me. I'm Jewish too.'
'You're not!'
'I am! My father was talking to us about it only last week. He said we were Jews and no matter what happened my brother and I must never forget it.'
'But you don't go to a special church on Saturdays like Rachel Lowenstein.'
'That's because we're not religious. We don't go to church at all.'
'I wish my father wasn't religious,' said Elsbeth. 'We have to go every Sunday and I get cramp in my seat.' She looked at Anna curiously. 'I thought Jews were supposed to have bent noses, but your nose is quite ordinary. Has your brother got a bent nose?'
'No,' said Anna. 'The only person in our house with a bent nose is Bertha the maid, and hers only got like that because she broke it falling off a tram.'

I See You...I wonder what is next

Title: I See You

"There had been no violence, which meant the theft of Cathy's keys was a theft, not a robbery, but Kelly decided to gloss over the fact, in case the severity of the crime was directly proportionate to Tamir's level of cooperation. Besides, if Cathy was right and the offender had followed her home, and had since been using her key to gain access to her house, there was something far more serious going on. A shudder ran through Kelly at the thought of someone creeping around Cathy's house. What had he been doing? Touching her make-up? Taking her underwear? Cathy had said she thought someone had been in her house when she was at work, but what if that wasn't the only time? Kelly imagined an intruder moving quietly around Cathy's kitchen in the dead of night; creeping upstairs to stand by her bed and watch her sleep."