The Girl on the Train...Really mixed reviews

"Tuesday 9th July 2013
Morning
The pile of clothes from last week is still there, and it looks dustier and more forlorn than it did a few days ago. I read somewhere that a train can rip the clothes right off you when it hits you. It's not that unusual, death by train. Two to three hundred a year, they say, so at least one every couple of days. I'm not sure how many of those are accidental. I look carefully, as the train rolls slowly past, for blood on the clothes, but I can't see any.
The train stops at the signal as usual. I can see Jess standing on the patio in front of the French doors. She's wearing a bright print dress, her feet are bare. She's looking over her shoulder, back into the house; she's probably talking to Jason, who'll be making breakfast. I keep my eyes fixed on Jess, on her home, as the train starts to inch forward. I don't want to see the other houses; I particularly don't want to see the one four doors down, the one which used to be mine."

It is fast paced, it has turns which I didn't expect, there are rabbit holes which leave you clues for the wrong character. There were so many changes and different directions that I did not know what to expect next. I did not anticipate the ending and I did not work it out. I am usually pretty good at working out a "who done it?" book but this one I did not. I found the characters detailed and interesting, I also found a number of them to be really irritating, purely due to how well Paula Hawkins described them and created their character. 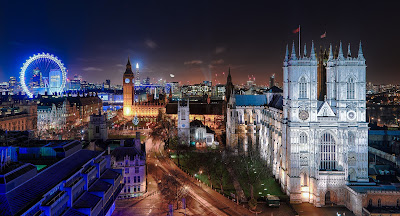 Rachel, the main character was married to Tom, as far as she knew they were madly in love and had no problems, I am sorry but no relationship is perfect, every relationship has to give and take and
Rachel is very naive to think her's and Tom's doesn't. Surprise, surprise Tom does not think the same, he is aware of Rachel's downfalls. He finds he cannot live his life with Rachel and he needs to get away from her, through the arms of Anna. Rachel can't process this and understand that Tom doesn't love her anymore and that he has moved on. Rachel really annoyed me, she was so needy, irritating and frustrating. Tom kept telling her he wasn't interested, that he had moved on and she would not listen. Rachel turns to drink and creates a number of difficult situations for herself and anyone who knows her. She apologises numerous times but she does not seem to understand that her apologies will only have effect for a limited time. If she does not act on her apologies then she will soon become alone, with not only no husband but no friends. 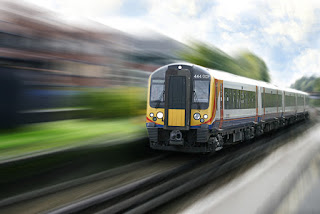 Through Rachel's difficult times she loses her job. She has no husband and has lost her home. She moves in with her distant friend from university Cathy. Cathy takes a massive chance on Rachel and tries to help her, they were never particularly close at university but Rachel had nowhere else to turn in her hour of need. Rachel can't bring herself to tell Cathy that her life is spiralling out of control so she continues to get the train "to work". She continues to get the 8:04am train from Ashbury to London and the 17:56 back from London to Ashbury. This is where she sees Jess and Jason living their lives in their home. Rachel watches them from the comfort of the train. The train stops at the same signal light every journey and Rachel started to look around her, to find she gained an insight into someone else's lives. The lives that she thought were perfect, in such contrast to her own, she thought Jess and Jason were perfect. This did not appear to be the case. Jess is actually Megan and Jason is really Scott and they are just as unsure as everyone else. Rachel then suddenly sees something which she questions and starts to see reports in the news that Megan has gone missing. No one seems to know anything, does Rachel hold the answer? 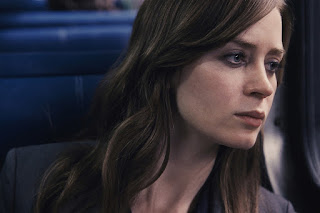 Through the changes in all of the character's lives and stories, we unravel what is actually going on. I thoroughly enjoyed this book and I only hope the film is as good, however, I have heard that it misses out large sections and details of the book and it is in America rather than the UK as it should be. Also, the image I had of Rachel in my head was of a person who had poor hygiene, had recently gained a lot of weight and who was struggling with their life, it was not the image of the beautiful Emily Blunt. I am sorry but this is what films do, they don't stick to the books but go off what they want people to see in order to draw in the viewings.

I would definitely recommend this book to other people, it was a really good story. I would definitely now change my opinion on whether it was a good read or not, in my opinion, it definitely is. I have spoken to my mum about her opinion of the story as she had already read the bok and she did not enjoy it. She found it predictable and she knew what was going to happen. She said she worked out "who done it" right at the beginning. I found it very interesting that we could have such a difference of opinion.

Since completing The Girl on the Train I have received a book from an author, called Killer's Forest by Ellington Norris. I hope to finish it very soon and will write a review in due time...Steph xx
at 20:16