Last Friday I used my final official day of the summer holidays to go and visit Seven Stories in Newcastle. This is somewhere I have visited on a number of occasions and absolutely love it! 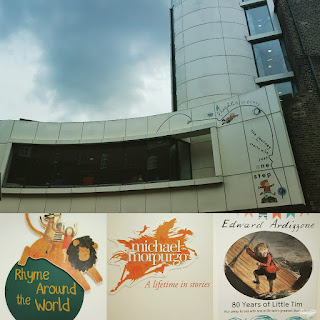 Seven Stories is located in the Ouseburn Valley area Newcastle. There is a petting farm next door, a riding school over the road and a selection of independent art galleries in the surrounding area. Seven Stories is the National Centre for Children's Books in the United Kingdom. I feel very lucky to have such an amazing and inspiring place on my doorstep. A number of people had never heard of Seven Stories and didn't know what it was. It is a sanctuary of seven floors dedicated to the great and wonderful authors which have produced some spectacular work.

The first time I visited Seven Stories was when I was a student at Teesside University (Up The Boro). My undergraduate degree is in Early Childhood Studies and one of my modules in the first year was Literary Perspectives. We studied Charlie and the Chocolate Factory by Roald Dahl and I Know Why The Caged Bird Sings by Maya Angelou, such a great book if you have not read it! As part of the module, we visited Seven Stories. 115 first year Teesside University students paid a visit. We completed a workshop about linking children's books to an activity, as this would be an assignment later in my degree, and we were given a tour of the centre. I absolutely loved it from start to finish, The second time I visited I as living in Newcastle whilst studying for my teaching certificate from Northumbria University (sorry Newcastle, I'll always be a Teesside girl). I went with the sole purpose of buying a signed copy of Skellig by David Almond. A book which I had read at school in English in year 8. I have since found out that Michael Rosen was there the next day signing copies of his books and one of my friends went and met him! Still incredibly jealous. However,  I also went on a visit to the Ouseburn Valley whilst at Northumbria University and we visited the petting farm and the WWII air raid shelter which had been converted from a previous mining tunnel, which is still there today. There is plenty to do in Ouseburn and it will definitely give your legs a good work out as it is all on a huge hill. 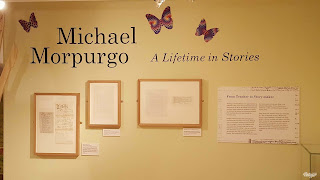 I had seen on the local news and read in the papers that Michael Morpurgo had donated everything, that's right, everything to Seven Stories. Original manuscripts, drafts of books, illustrations, items given to him from Steven Spielberg during the filming of War Horse, amongst many others. I HAD to go and see it. Seven Stories have a variety of different exhibitions on. Each exhibition usually runs for around 6 months to a year. The previous exhibition had been a Harry Potter exhibition which I did not know about and have not forgiven myself for not going to see.

So I absolutely knew I had to go and see the Michael Morpurgo exhibition. There was no stopping me. I had only just completed the Butterfly Lion with my class at school. With over 100 books to his name I just knew this exhibition would not disappoint. And wow! It certainly did not disappoint.

There was a selection of other exhibitions on at the same time. I purposely started on the 7th floor and worked my way back down the seven storeys. I had just missed the story telling session on the 7th floor in the attic but I knew there were other times for the stories to be told so I would come back later in the day for that. I moved onto the 6th floor. The Gillian Dickinson Gallery was the home to the Edward Ardizzone exhibition. A celebration of 80 Years of Little Tim.I am not going to lie I had not heard of Edward Ardizzone or Little Tim, but I am so glad I went to look at the intricate and beautiful artwork he had created. There was a large number of illustrations, books, information and letters donated to the exhibition about Edward Ardizzone and Little Tim. The illustrations were truly incredible, The detailed work Ardizzone had gone to show the texture and feeling within a picture. All of the illustrations were hand painted. They were then drawn over the top with acetate in front of the paint so the lines of the drawing would be seen clearly. 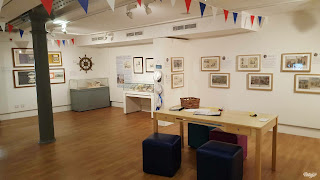 There was plenty for all the family to enjoy in this exhibition. There was colouring in and dressing up for children, there was information all around the room and very informative video to watch of Mr Ardizzone completing his lovely work. Not only had Edward Ardizzone created the illustration for Little Tim but he is also the illustrator for a range of other children's books, including Stig of the Dump (now you can picture the types of beautiful illustrations I am talking about can't you).

On the 5th floor was the Robert Westall Gallery. In this gallery was the many different rhymes, poems and nursery rhymes from all around the world. Rhyme Around the World looks at all the different types of poems. These included, Polly put the Kettle on, Sing a Song of Six Pence, Over the Hill and Far Away and many others. There was a selection of different countries variation of the childhood favourite nursery rhyme Little Miss Muffet. Including, English, American, Australian and Jamaican. It was very interesting to see the different variations of the same nursery rhyme. How a classic rhyme can be altered and changed to fit with the countries culture and a whole new rhyme can be created. 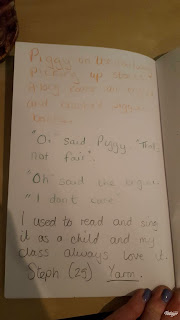 When I arrived at the Michael Morpurgo exhibition in the Sebastian Walker Gallery. As soon as you walk into the gallery you find yourself in a literary forest. There are wooden trees with quotes and information about Michael Morpurgo's books and creations. 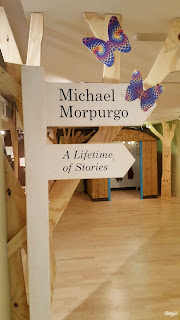 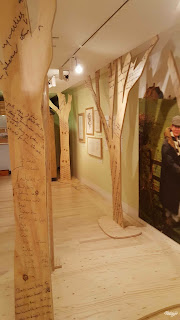 There was a very high quantity of Michael Morpurgo books which were looked at and explored throughout the exhibition. War Horse, Kensuke's Kingdom, It Never Rained, An Eagle in the Snow, The Butterfly Lion amongst many others. 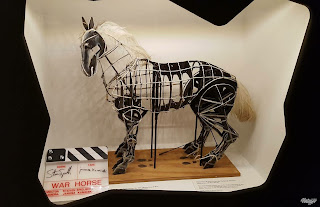 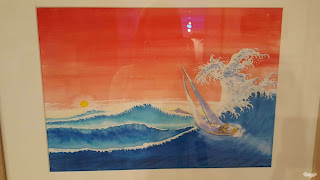 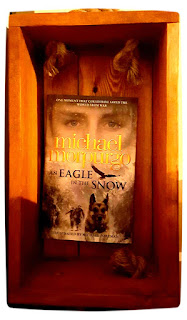 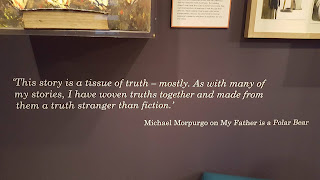 There were visual resources, audio resources and a variety of different pieces of art, notebooks, sketches, notes, paintings, letters to publishers, letters of recommendation for jobs and a number of different descriptions, information and biographies about Michael Morpurgo's life and how he became the great author we know and love today. 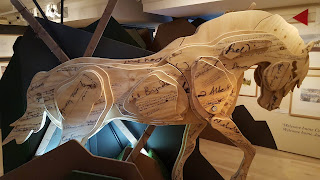 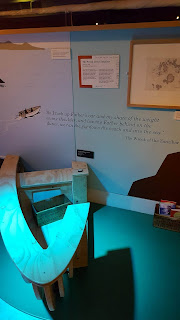 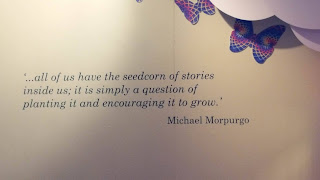 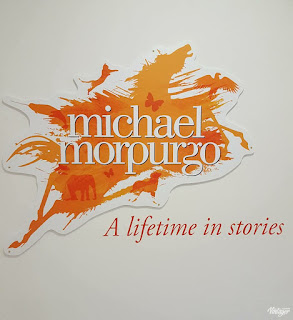