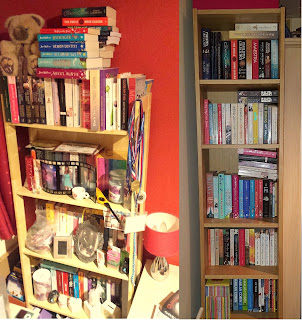 At the beginning of this year, I put myself on a book buying ban. It was pointed out to me numerous times by my boyfriend that there is such a thing as "too many books". I still don't believe him but there was a time when I had to call a stop to book buying for a little while. This was the time. January 1st 2018 was when I had to put a stop to buying books.

To start with I found it quite difficult when such a fantastic array of new books were coming out in 2018. Eleanor Oliphant is Completely Fine by Gail Honeyman was the first one on the list which I hadn't bought from the previous year and I had to come to terms with I wouldn't be able to until next year. Unfortunately, people kept telling me that it was such a good read and that I had to read it! I will, just not yet!

This is Going to Hurt by Adam Kay was another book on the list which I was desperate to buy after hearing so many good things about the book. I watched the National Book Awards today and saw that this book has been awarded three awards. Adam Kay is also doing a tour next year and coming to visit a local theatre near me and I really want to go and see it, however, I want to read the book first. I need next year to come so I can buy this book! I keep looking on Amazon at the daily deals as I have been told it has been a 99p deal before but no such luck yet.

This leads me to the little hiccup I had. It started in February, I know I didn't get very far but I caved at looking at the 99p deals and found I See You by Clare Mackintosh. I had previously read I Let You Go and I absolutely loved it and I just couldn't resist. So I had one set back, one! That is allowed surely.

I was firmly back on the book ban train. However, once again I fell off in April. I was so confident. But yet again, a 99p offer could not see me go without. I bought The Sterling Shore Series by C. M. Owens. My friend recommended this and I have since reviewed the first book and was disappointed about the story. It was definitely not worth falling off the train.

This is when I then had a very rocky patch. I was not able to resist the 99p deals. The Martian by Andy Weir, The Tattooist of Auschwitz by Heather Morris, The Couple Next Door by Shari Lapena, Why Mummy Swears by Gill Sims, Three Things about Elsie by Joanna Cannon and finally Thirteen by Steve Cavanagh. A huge range of books which have been massively popular this year. All books I haven't read as I now feel guilty because I have LOADS and I mean about 200 unread books just piling up on my bookshelf. I am slowly getting through them.

I may have caved and bought these books but in my defence, they were only 99p! In addition to this, I have received a number of free books kindly sent to me by Kelsey at Book Publicity Services. These fantastic books include Blood Moon Part 1 by S Yurvati, 365 Days of Happiness by Jacqueline Pirtle, Thomas Wildus and the Book of Sorrows by J. M. Bergen, The Last Straw by Ed Duncan, Blood Moon Part 2 by S Yurvati and Dragon Tear by S Yurvati. I can't thank Kelsey enough for sending these books to me. I am so looking forward to what next year brings for any books which she may kindly offer to me.

Then there were the books which I bought at book signings! The Crooked Sixpence by Jennifer Bell, Phoenix Burning, Phoenix Rising and Savage Garden all by Bryony Pearce. Who can resist a signed copy of a book! I just had to really when my work invites these amazing people to speak to the children. It is only polite really!

When I looked at all of this I thought I had stuck to the book ban well. Well I had only bought some books and I received the others, they were kindly given to me for my opinion. However, I then looked back at my Goodreads account and realised, how many books I have received from a friend and kept hold of. I was so happy thinking I hadn't bought that many and then I realised I have just been lying to myself. Technically I haven't bought that many, but that does not mean I haven't received a huge amount. I absolutely need to evaluate what books I have and how many I buy or receive and I will be absolutely reinstating the book ban next year. No more books I will pay or receive from friends. The only books I will receive are the books which are sent to me to review! Please don't tempt me, I am not that strong! 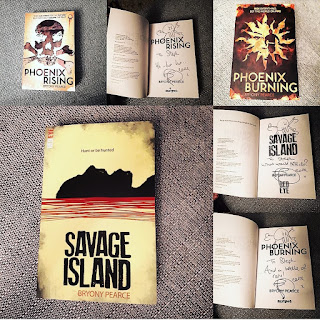 Email ThisBlogThis!Share to TwitterShare to FacebookShare to Pinterest
Labels: eleanor oliphant, i see you, the couple next door, the martian, the sterling shore series, the tattooist of auschwitz, thirteen, this is going to hurt, three things about elsie, why mummy swears